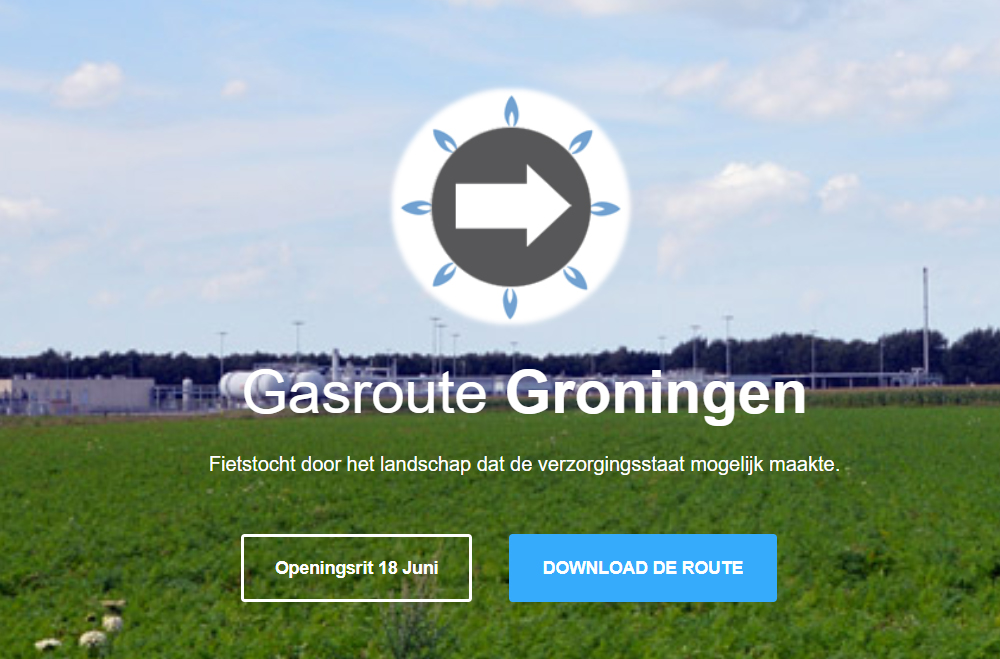 The route starts in Loppersum, the town that in 2012 experienced an earthquake of 3.6 on the Richter Scale. It was this earthquake that made the Dutch goverment take action in investigating the effects of earthquakes in the region.
Passing four gas extraction sites and a seismic measurement point you bike towards Kolham, this is the furthest point on the route and it was right around here that natural gas was first discovered in 1959. When you walk up to the left side of the highway overpass you can see the monument in the shape of a gas molecule by artist Marc Ruygrok that was placed there in 2009.
After Kolham the route will take you through Froombosch, Slochteren, Schildwolde, Hellum and around the Schildmeer towards Appingedam. After which you bike back to Loppersum. Along the way you will pass three extraction sites and a beautiful clean stretch of asphalt in between the grasslands with nothing more than a big industrial gas valve and an empty evacuation assembly point next to it. Even though Loppersum is the starting point of the tour, you are totally welcome to begin wherever you please.
If you are not able to bring your own bike to Loppersum I recommend you hire one at Bennie’s Fietsenhandel, located on the Stedumerweg 22 (a twenty minute walk from the train station).

Below you will find the gas related locations on the map numbered in red: 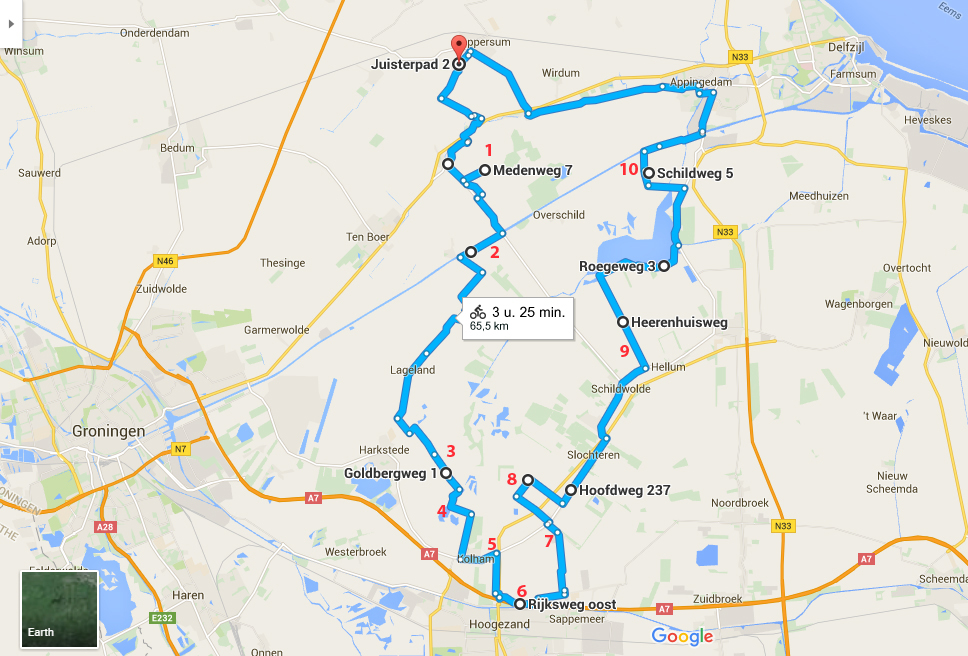 The best way to view the map is via Google Maps.

Download the route here as a GPX file so you can use it on your bikenavigationsystem or phone.

Or as a printable PDF here (2MB, designed by Renie Lamers). 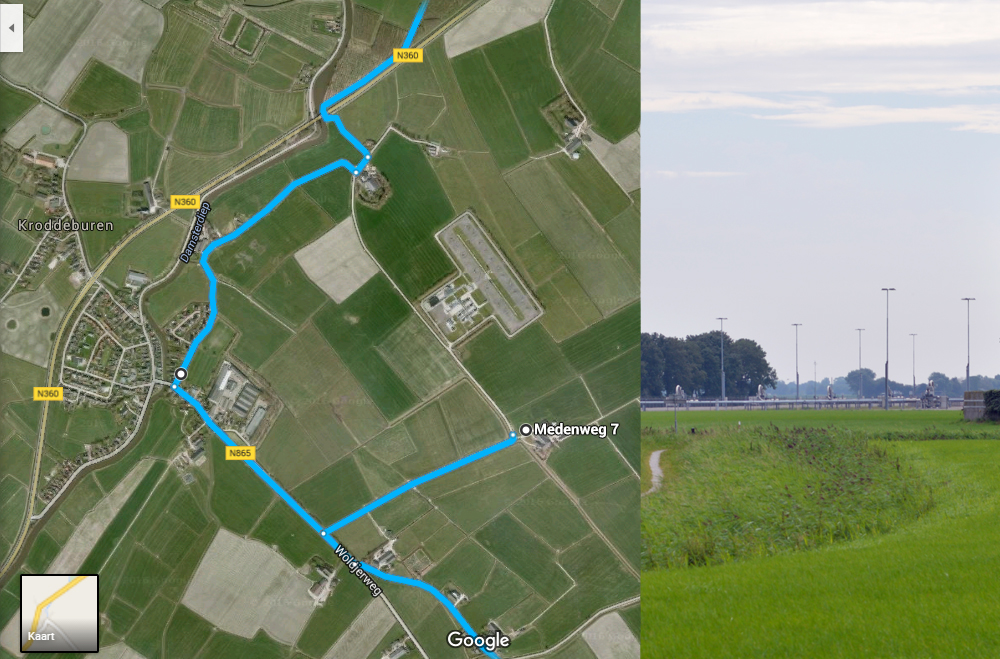 1, Ten Post: Pay attention when your biking from Loppersum through Winneweer towards the Medenweg. According to various navigation systems the extraction site is located on a public road but it looks like, at least part of, the road is private property. Just take a little detour as shown on the map above. 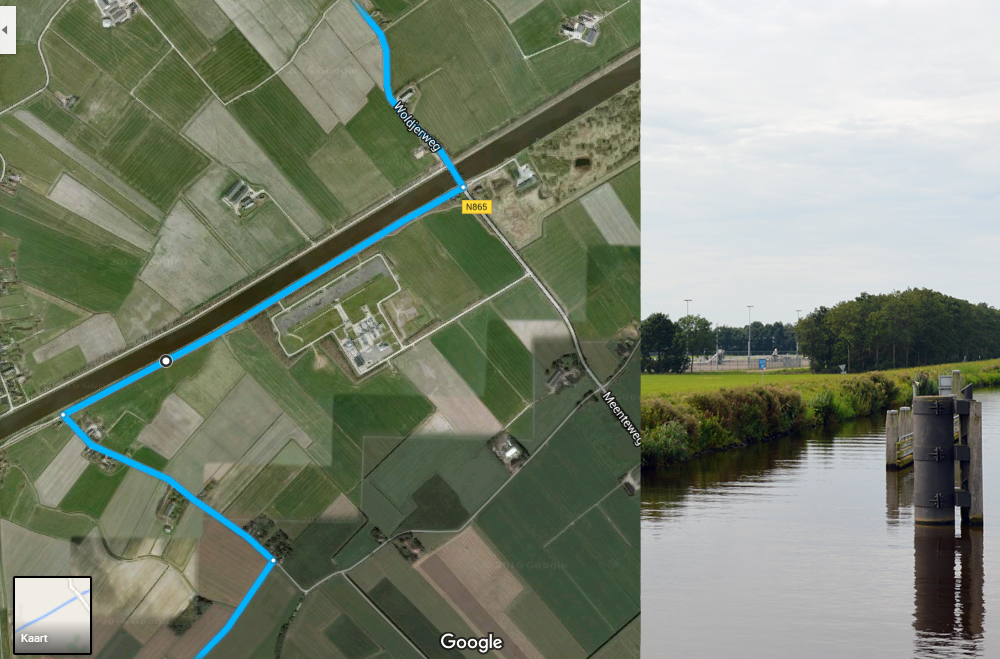 2, Extraction site Eemskanaal Zuidzijde: About a fifteen minute ride from the Medenweg. Nice little detail while biking on the Woldjerweg is the local version of the famous Cadillac Ranch in Amarillo, Texas. 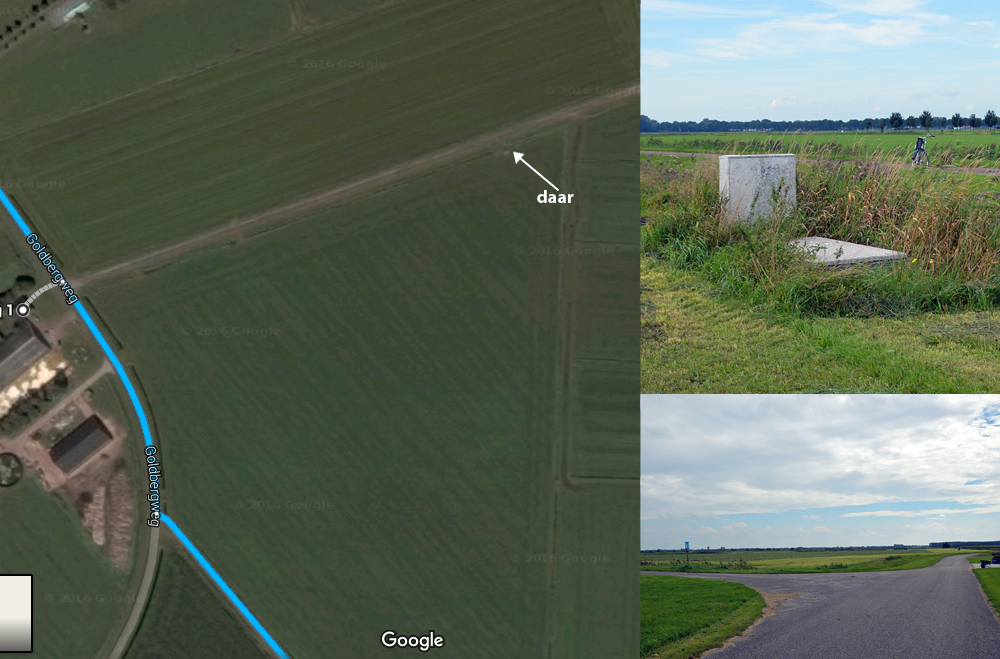 3, Seismic measurement point Woudbloem: This one is a bit trickier to find, when you are about to leave the Goldbergweg you have to turn left onto a dead end road that leads you straight into the fields. After about one hundred meters you will see an electrical box and a sheet of metal laying the grass on your right. What looks like a dead pixel on satellite images turns out to be a drilling hole containing four sensors that go down to 197 meters into the ground according to this seismic map by the Royal Netherlands Meteorological Institute. Once back on the Goldbergweg you bike a little further and make a left when you’re halfway down the turn. 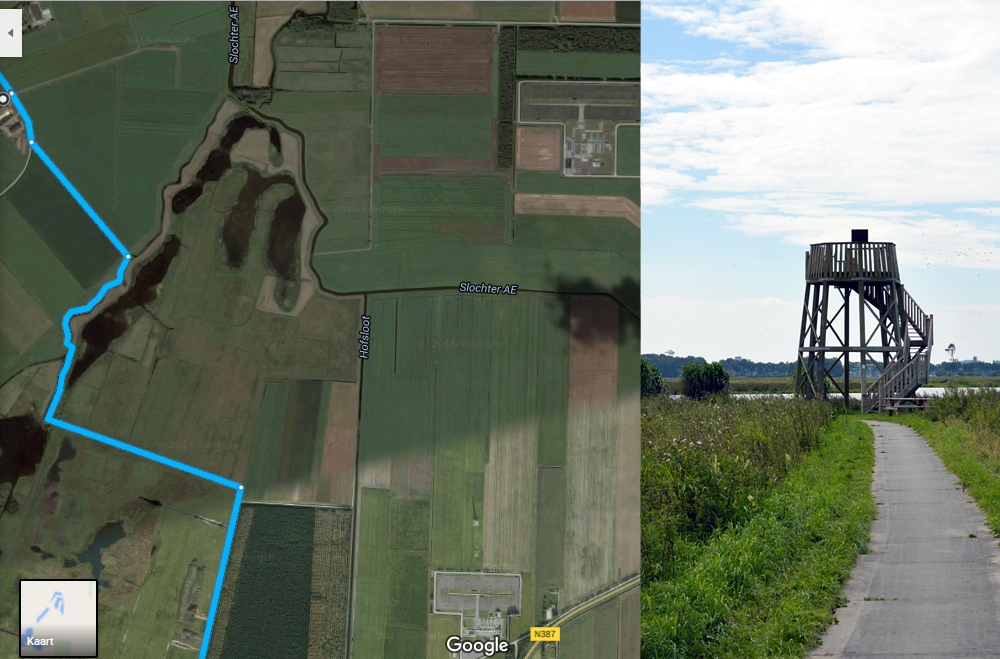 4, Nature park Kolham Westerpolder: One of the things you can see from the tower is the Froombosch extraction site (you will pass it more closely later during the ride). On February 25 2016, an earthquake of 2.4 on the Richter Scale took place close to Froombosch. 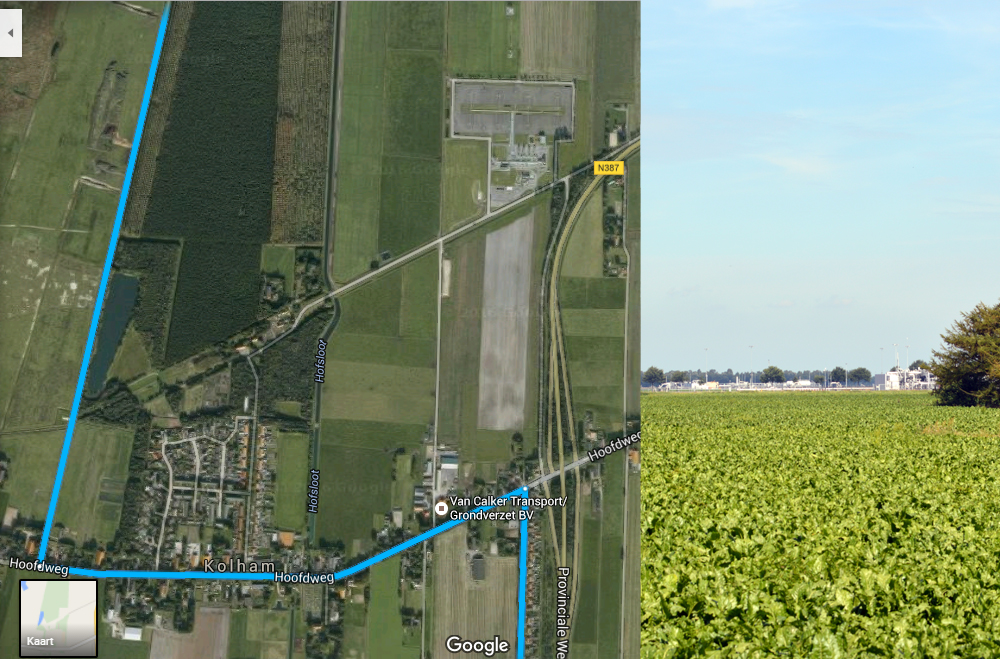 5, Extraction site Kolham: When you enter Kolham on the Hoofdweg you will notice an extraction site on your left. If you want to have a closer look feel free to take a little detour otherwise continue on. 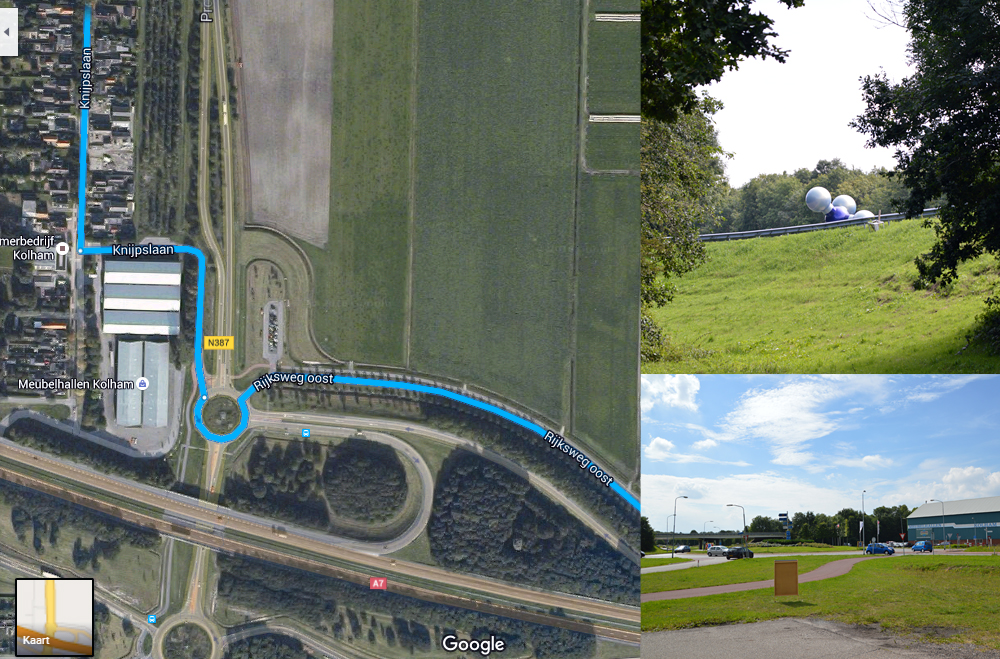 6, Meubelhallen Kolham: This is the furthest point on the route and it was right around here that natural gas was first found in 1959. When you walk up to the left side of the highway overpass you can see the monument in the shape of a gas molecule by artist Marc Ruygrokk that was placed there in 2009 in honor of 50 years of gas extraction. On the nearby parking area there is a small billboard with a short text about the extraction of natural gas in the province of Groningen. 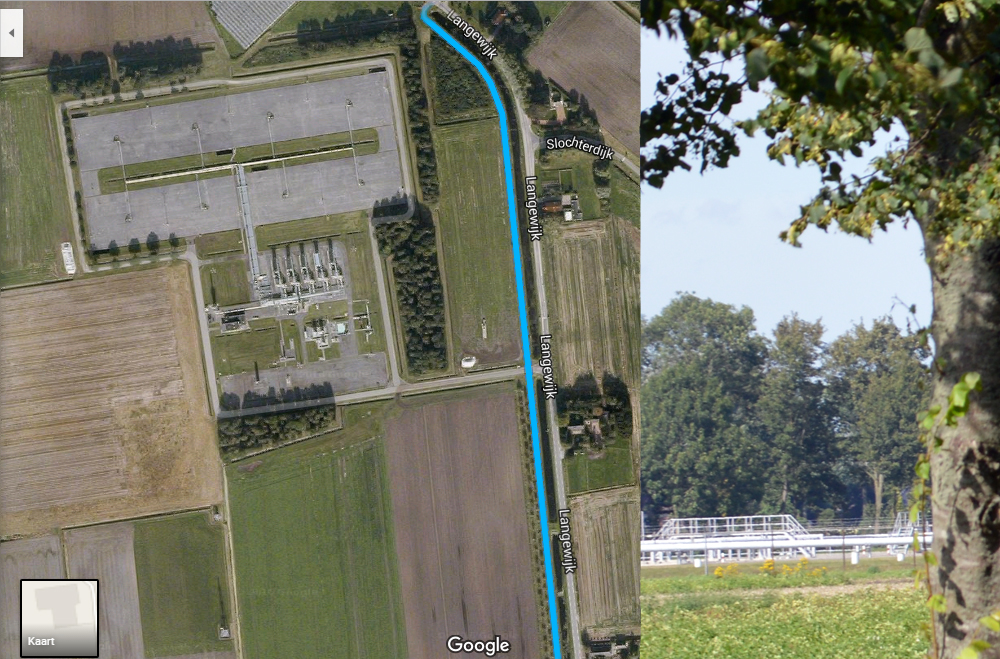 7, Langewijk Froombosch: The row of trees are an attempt to let the extraction site visually blend into the landscape. Make sure to turn a left onto the site, it is much bigger than you might expect when looking at it from the road. 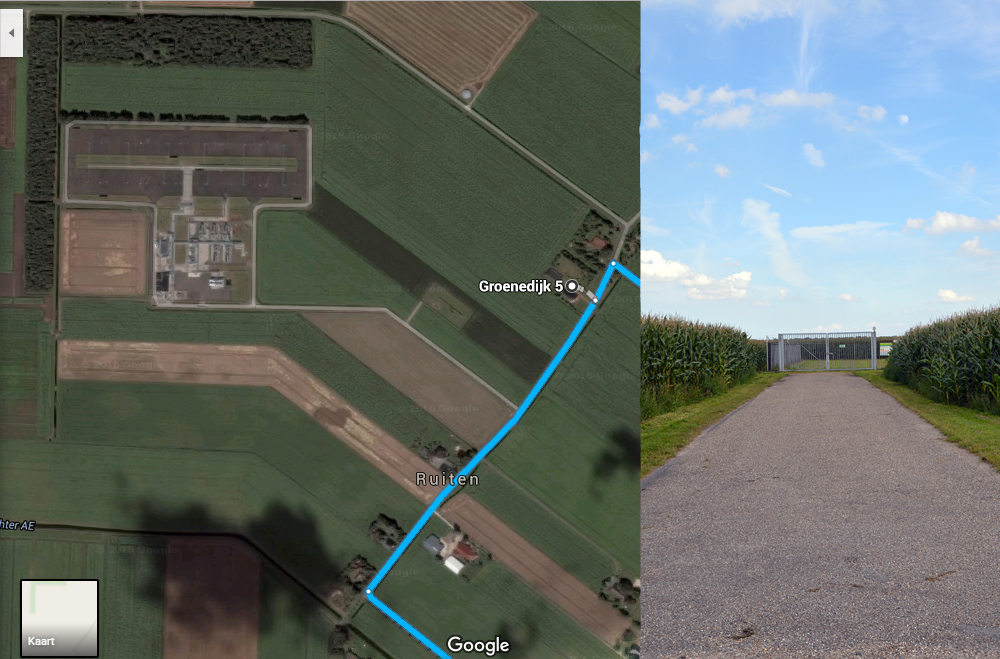 8, Groenedijk Froombosch: This is the site that saw earlier when you were on top of the watchtower at Kolham Westerpolder. When you bike a little bit further you will find a very nice picnic spot on the corner of Groenedijk and Boerweg. Bike along the Boerweg and make a left into Slochteren when you reach the end of it. Even though it is called the Slochteren gas field there are no extraction sites in the town itself. However, you do have the Politiepettenmuseum (open by appointment) and Landgoed Fraeylemaborg (open Tuesday-Sunday). From Slochteren you bike along the Hoofdweg through Schildwolde towards Hellum, make sure to have a good look at the beautiful herenboerderijen. As soon as you enter Hellum make a left onto Heerenhuisweg. 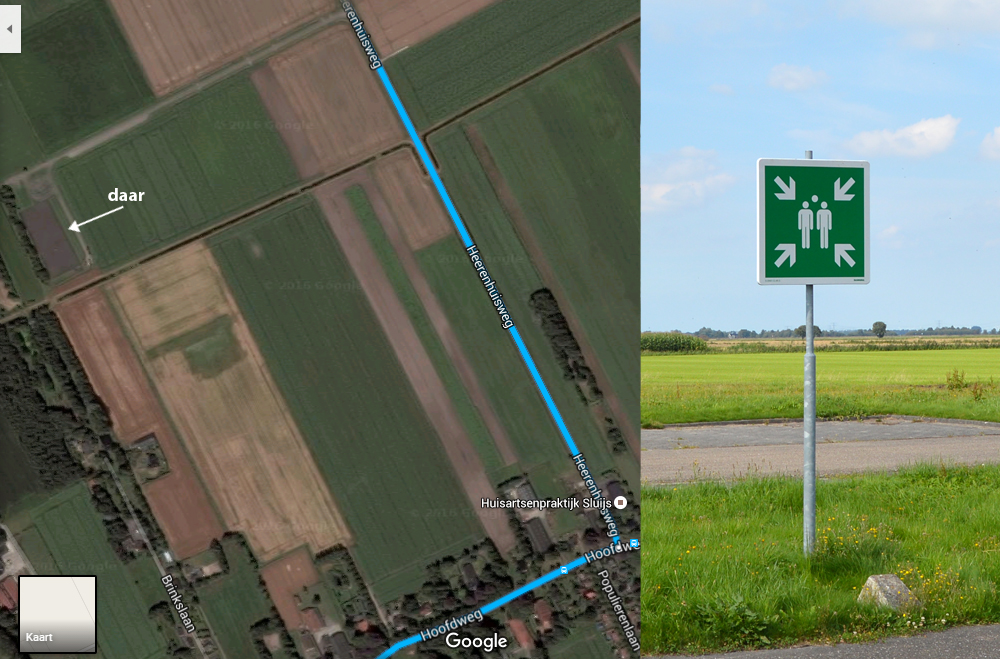 9, Heerenhuisweg Hellum: After a few hundred meters on the Heerenhuisweg take the first left. In between the fields you will find a wonderful piece of asphalt with gas valve and an evacuation assembly point. On September 30, 2015, the town of Hellum was hit by an earthquake of 3.1. on the Richter scale. Make a right when you reach Schildmeer and bike towards Appingedam. 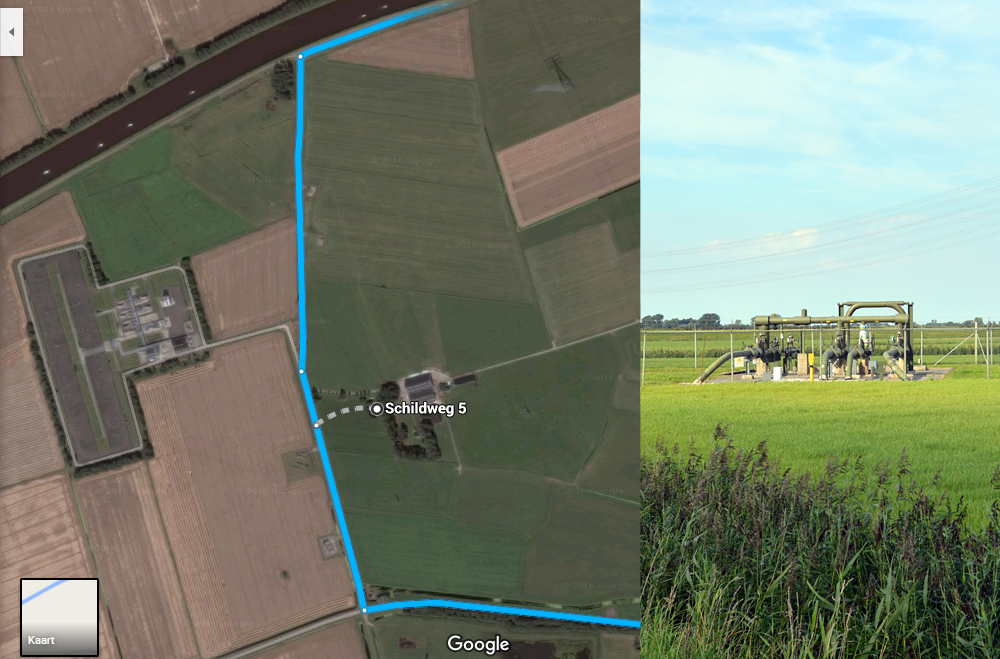 10, Schildweg Appingedam: In the outskirts of Appingedam you will find the last gas-related spot of this trip. Cross the Eemskanaal en bike through Appingedam, if you’re still up for it take a short detour along the de hangende keukens, back towards the starting point of this bike ride. Well done!