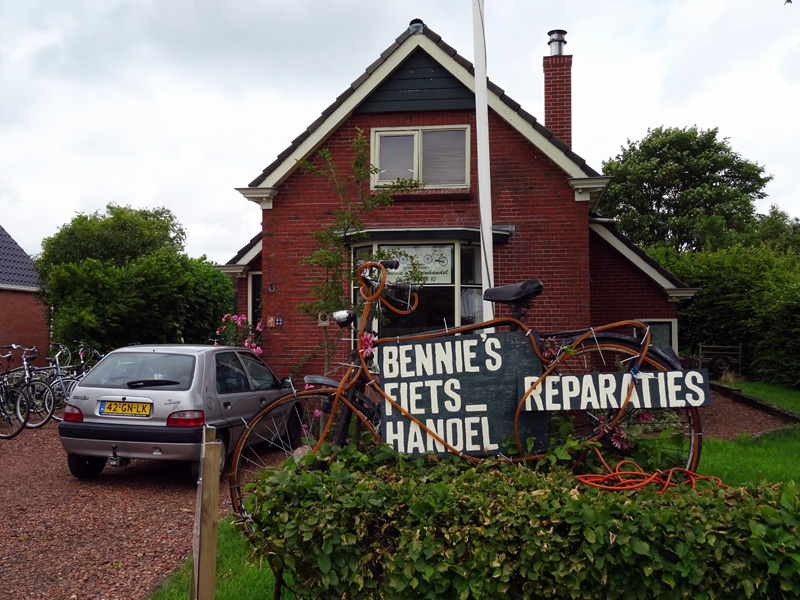 On June 18 2016 a group of eight people got together at Bennie’s Fietshandel in Loppersum to go for an opening ride. 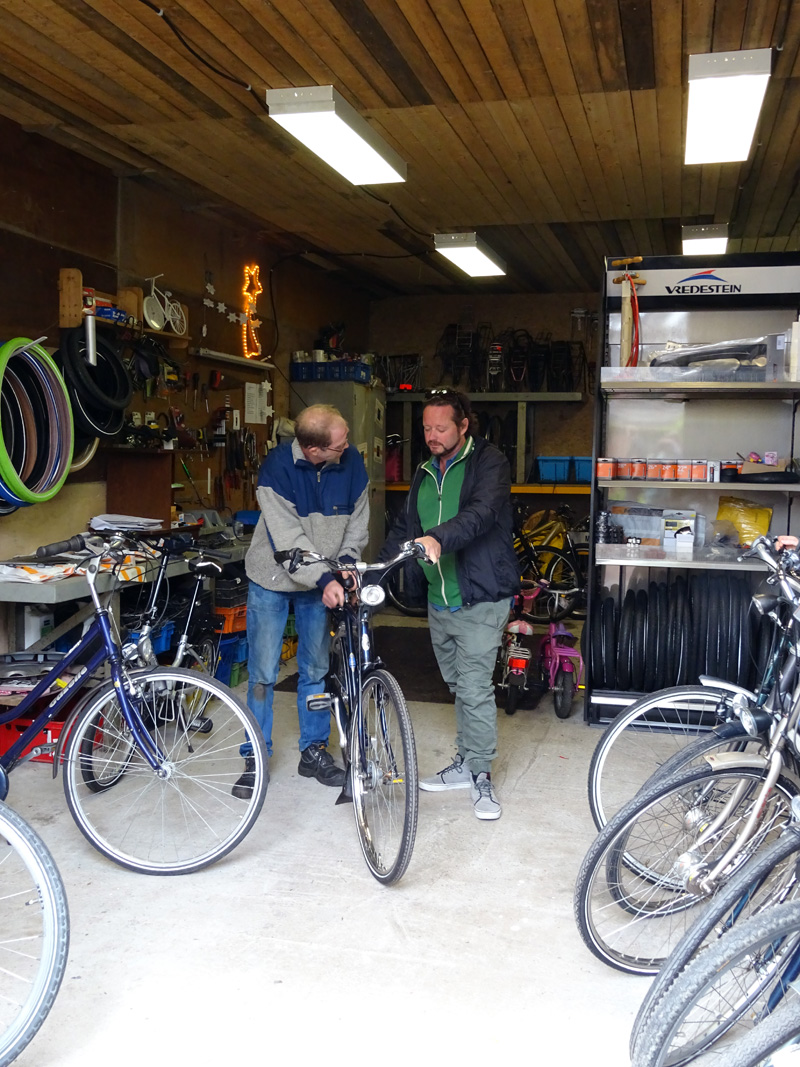 If you are not able to bring your own bike with you I highly recommend renting one from Bennie’s, only € 8 per day and adjusted to your size when you come to pick it up. 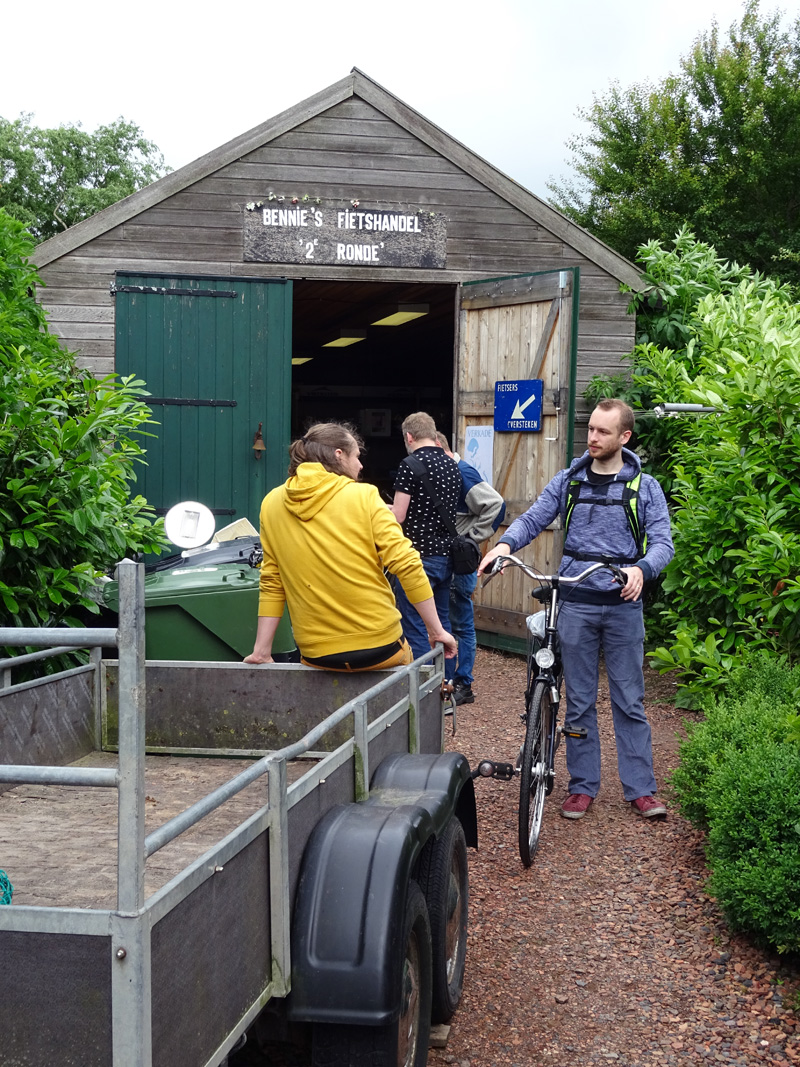 Painter Thijs Jansen with his bike for the day. Sjimmie Veenhuis patiently waiting for his. 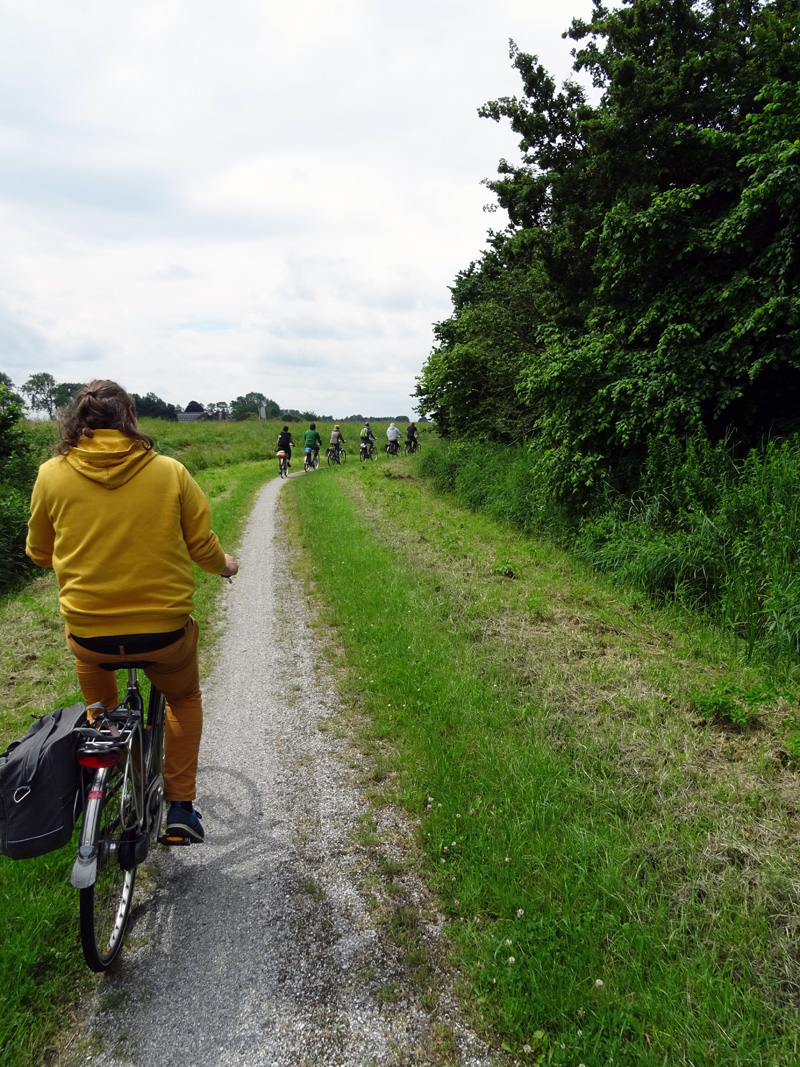 The route starts in Loppersum, the town that in 2012 experienced an earthquake of 3.6 on the Richter Scale. It was this earthquake that made the Dutch goverment take action in investigating the effects of earthquakes in the region.
Passing four gas extraction sites and a seismic measurement point you bike towards Kolham, this is the furthest point on the route and it was right around here that natural gas was first discovered in 1959. When you walk up to the left side of the highway overpass you can see the monument in the shape of a gas molecule by artist Marc Ruygrok that was placed there in 2009.

After Kolham the route will take you through Froombosch, Slochteren, Schildwolde, Hellum and around the Schildmeer towards Appingedam. After which you bike back to Loppersum. Along the way you will pass three extraction sites and a beautiful clean stretch of asphalt in between the grasslands with nothing more than a big industrial gas valve and an empty evacuation assembly point next to it. 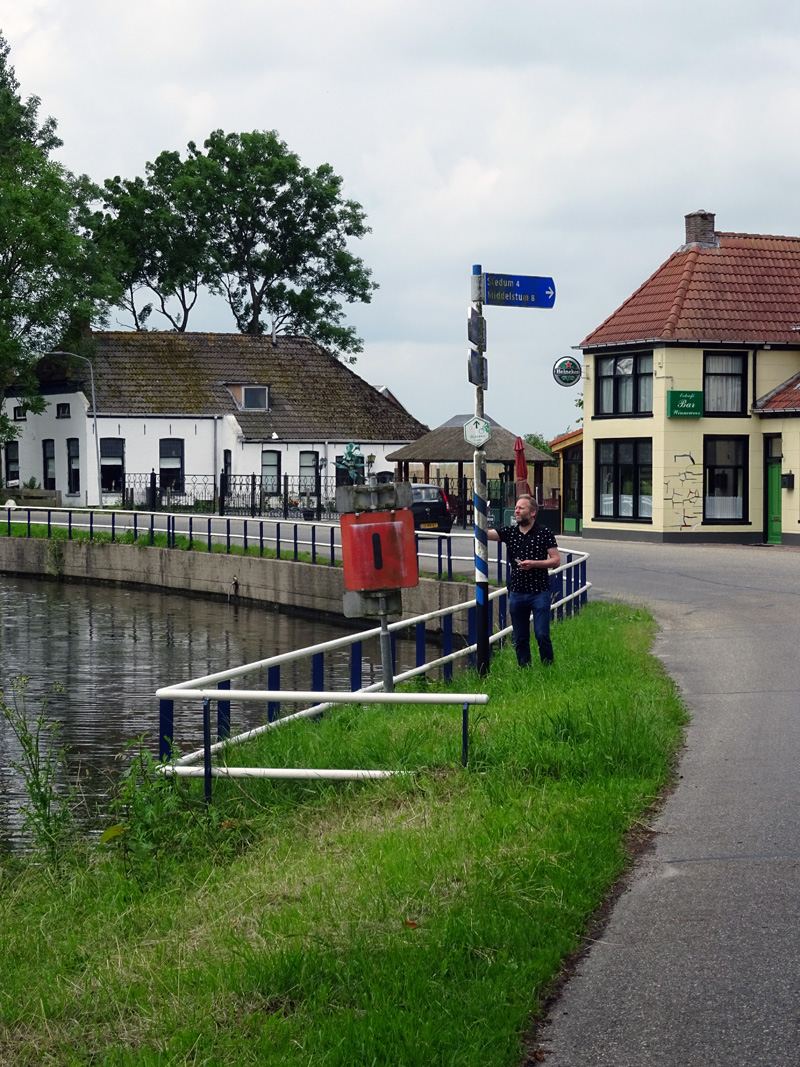 The great thing about biking with a group is that they are looking at it with fresh eyes, giving me tips on where to add additional signage. 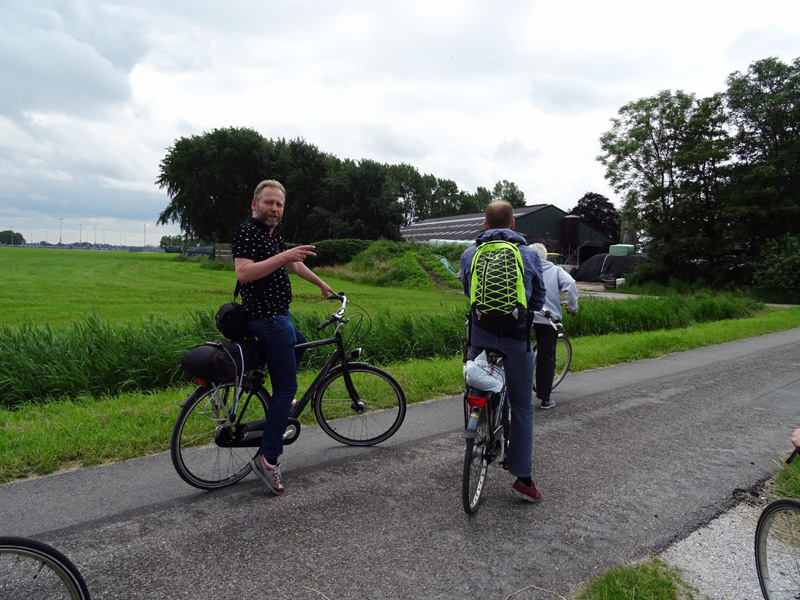 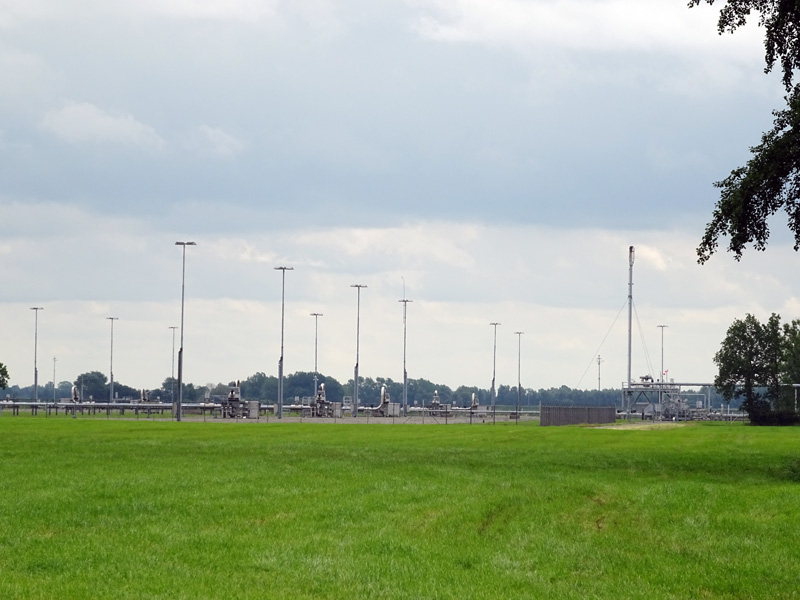 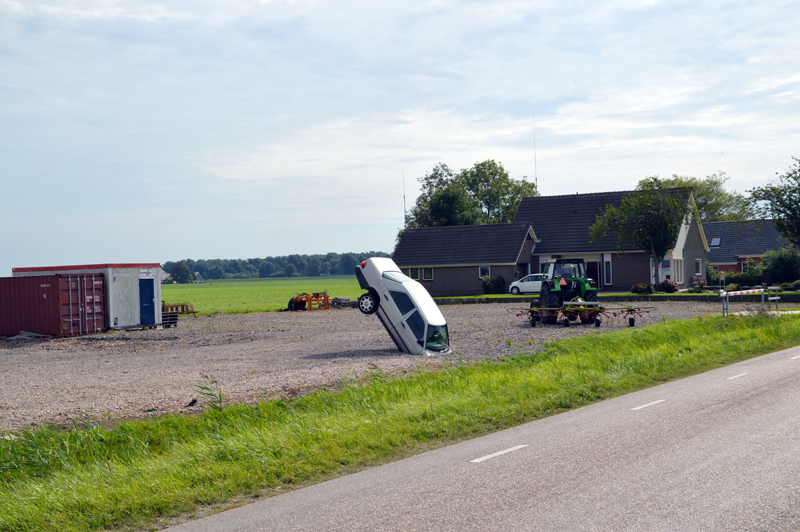 After a local version of the famous Cadillac Ranch and a ride along extraction site Eemskanaal Zuidzijde, we make a short stop in Harkstede for lunch. 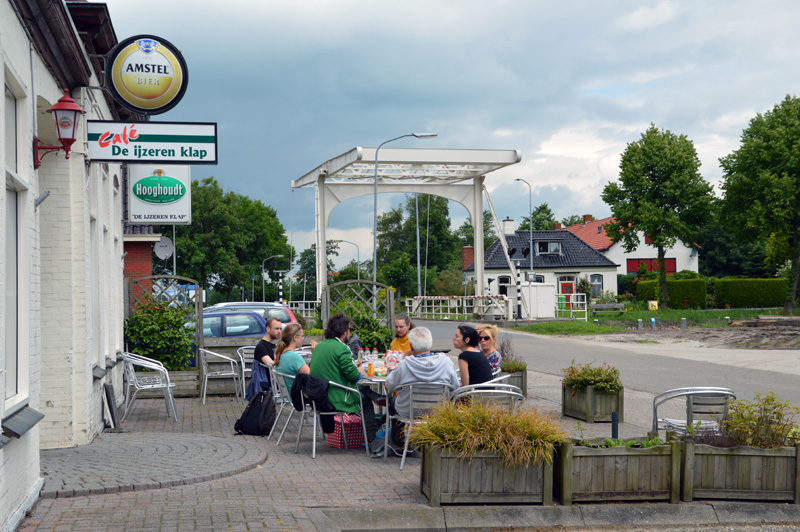 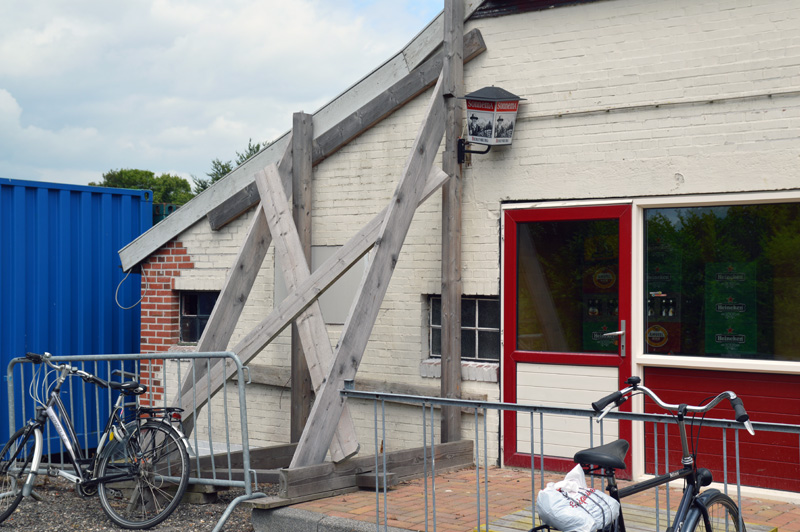 The tour is in no way intended as a form of disaster tourism but you cannot close your eyes for the damage either. At the IJzeren Klap they make a virtue of necessity, a support beam becomes a lamppost. 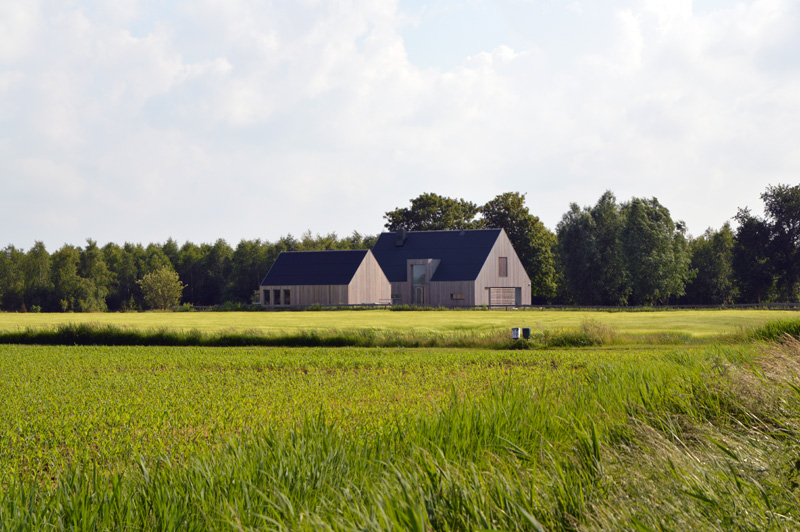 Architecture in Groningen is truly a thing of beauty, Photoshop come to life. 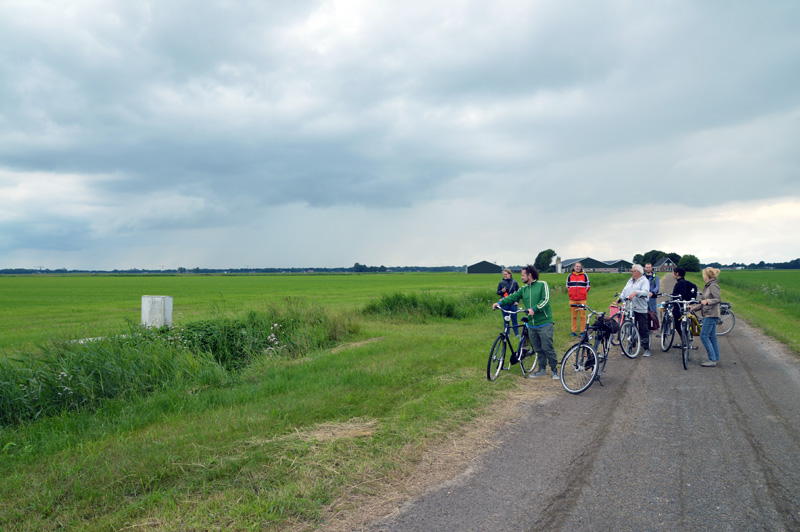 On Goldbergweg in Scharmer we take a left onto a dead end road towards the middle of the fields, looking for the seismic measurement point near Woudbloem. What looks like a dead pixel on satellite images turns out to be an electrical box and a sheet of metal. A drilling hole containing four sensors that go down to 197 meters into the ground according to this seismic map by the Royal Netherlands Meteorological Institute. 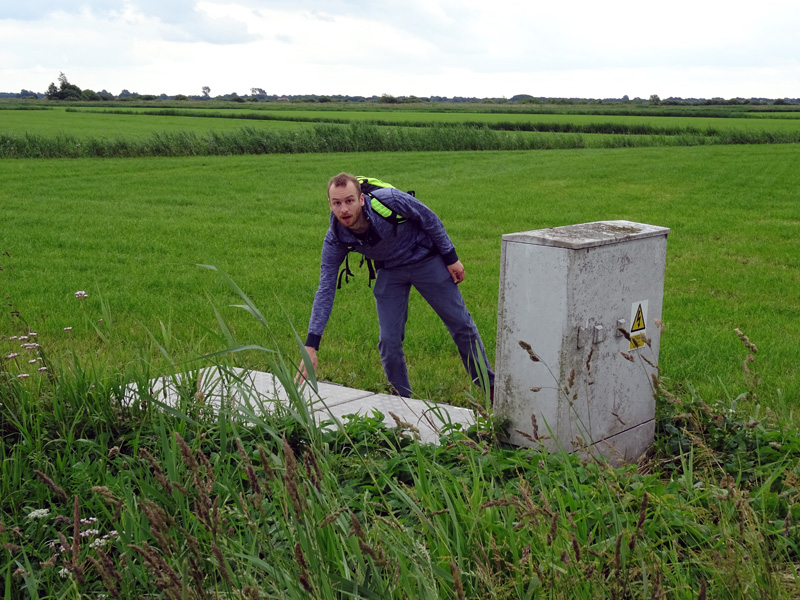 DANGER says a sign on the electrical box. Thijs Jansen can’t help himself, he likes living on the edge. 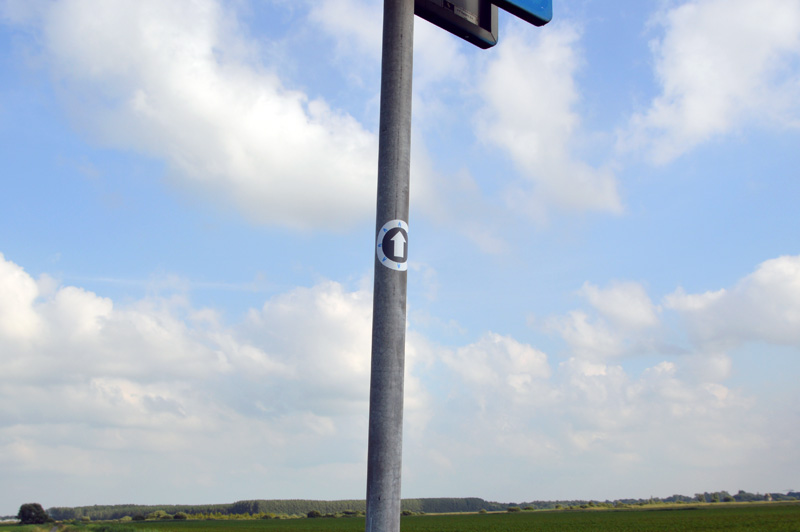 Straight ahead. Signaged drawn and pasted by myself.

Golden tip when cycling the route yourself, make sure that no rain is predicted. “A local light motregenbui” the weather forecast reported on 18 June. We get the first one at the Kolham Westerpolder nature reserve. 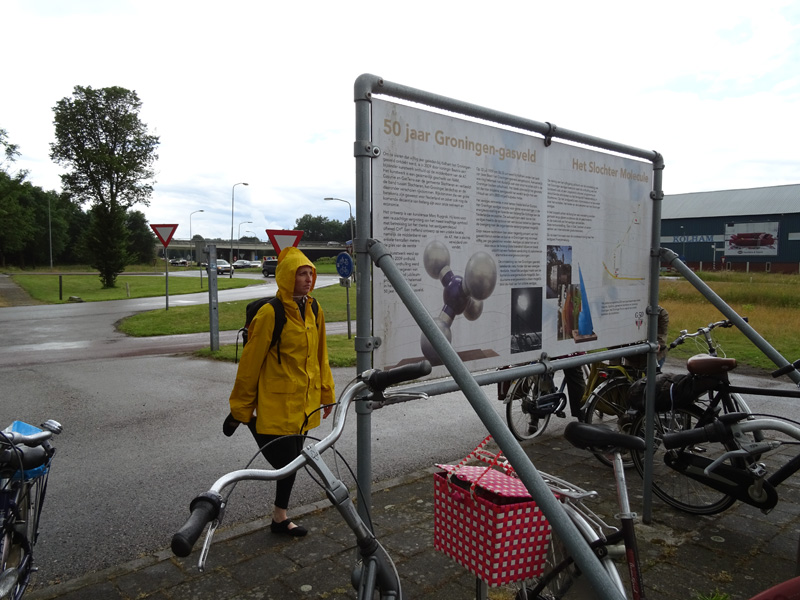 This is the furthest point on the route and it was right around here that natural gas was first found in 1959. When you walk up to the left side of the highway overpass you can see the monument in the shape of a gas molecule by artist Marc Ruygrok that was placed there in 2009 in honor of 50 years of gas extraction. On the nearby parking area there is a small billboard with a short text about the extraction of natural gas in the province of Groningen. 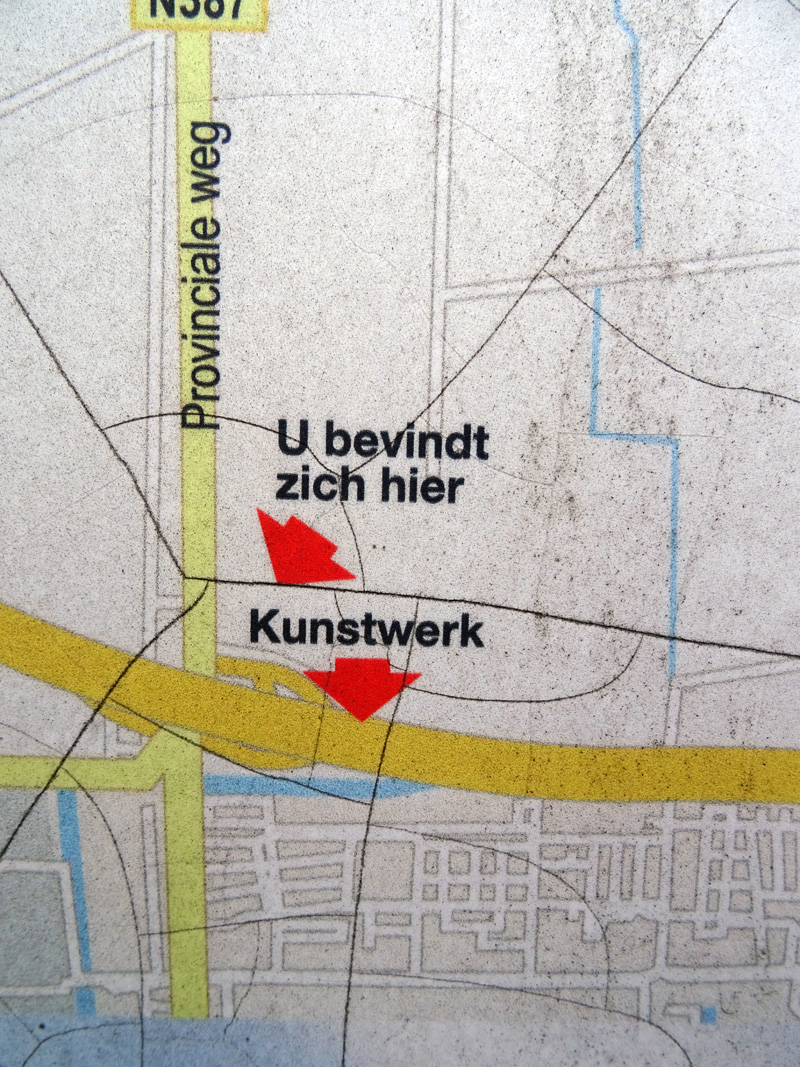 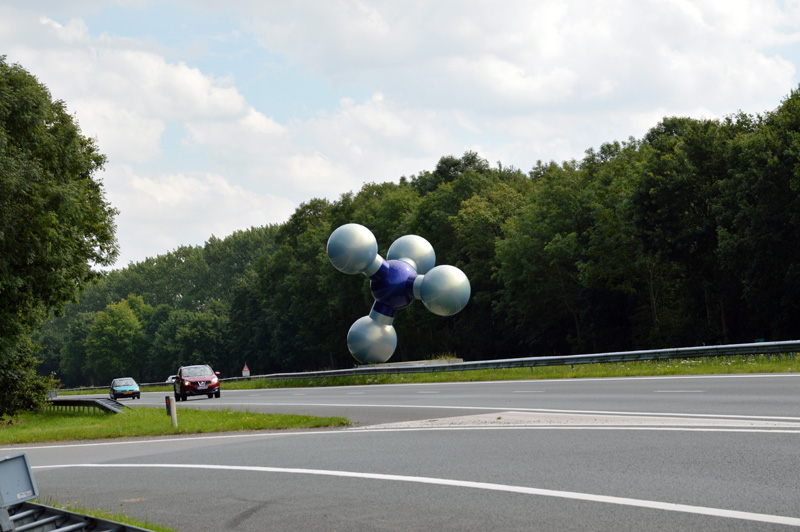 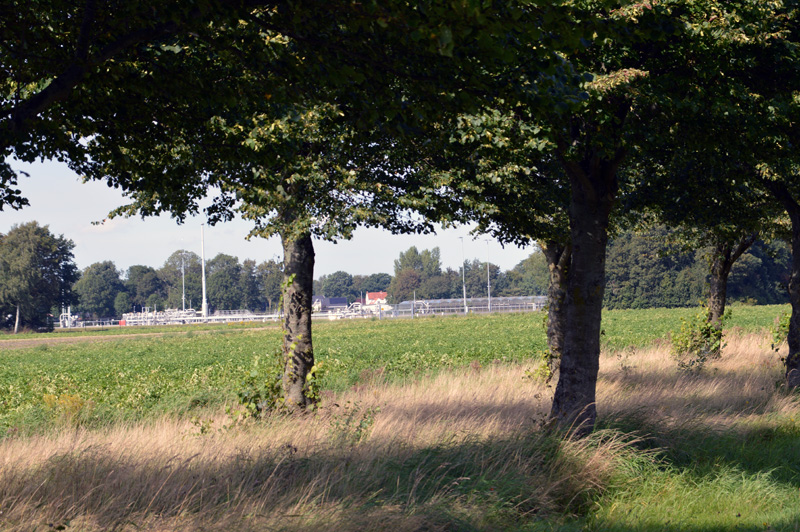 The weather cleared so we decided to bike on. At Langewijk Froombosch a row of trees has been planted in an attempt to let the extraction site visually blend into the landscape. What is special about this location is the small road that runs around the site, make sure to ride a little detour. 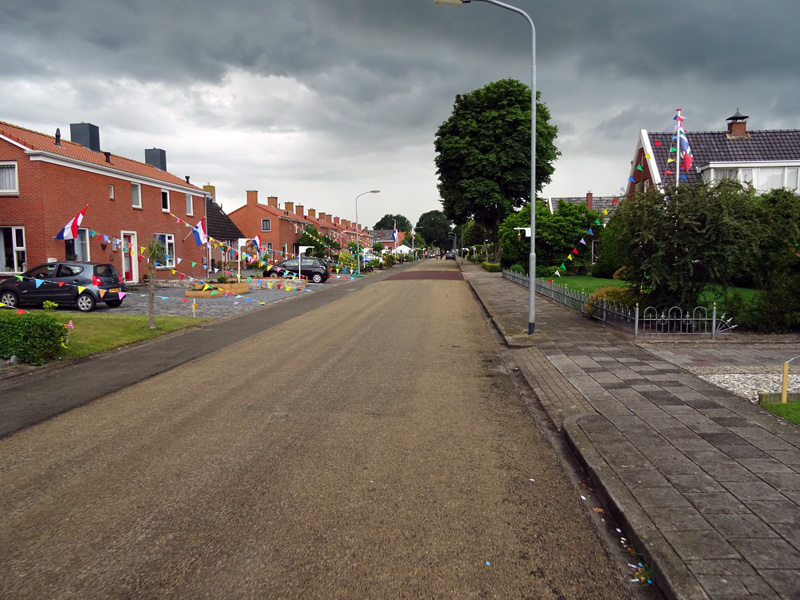 On the Ruitenweg in Froombosch we encounter the last bit of the annual village festival. The next shower of “local light drizzle” is starting to build up. 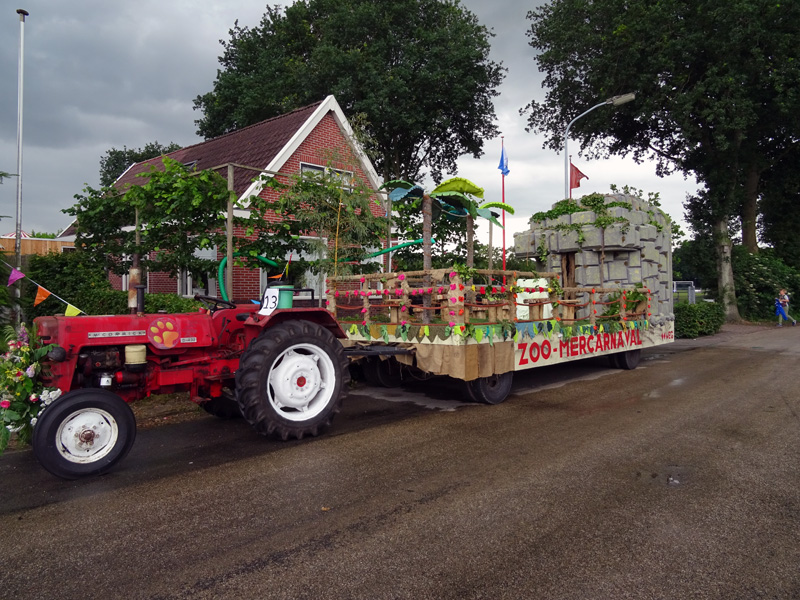 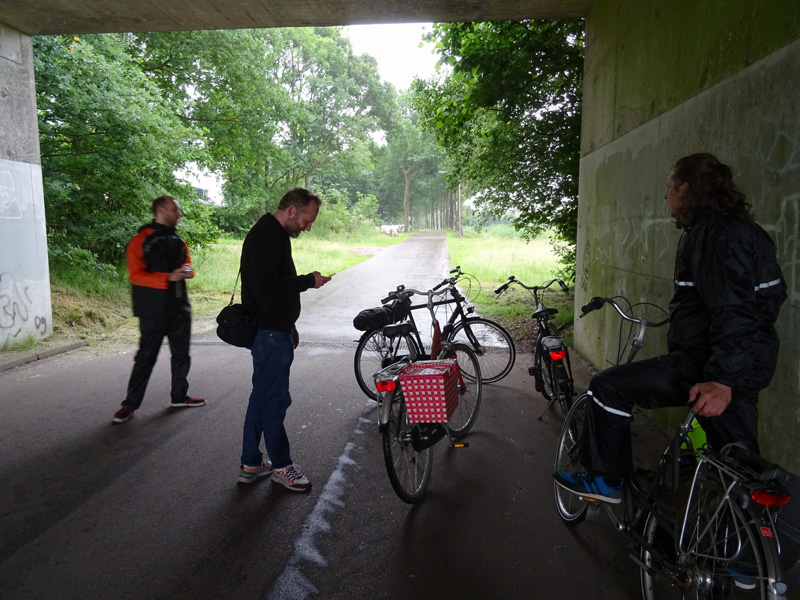 Just outside of Slochteren it really starts to rain. 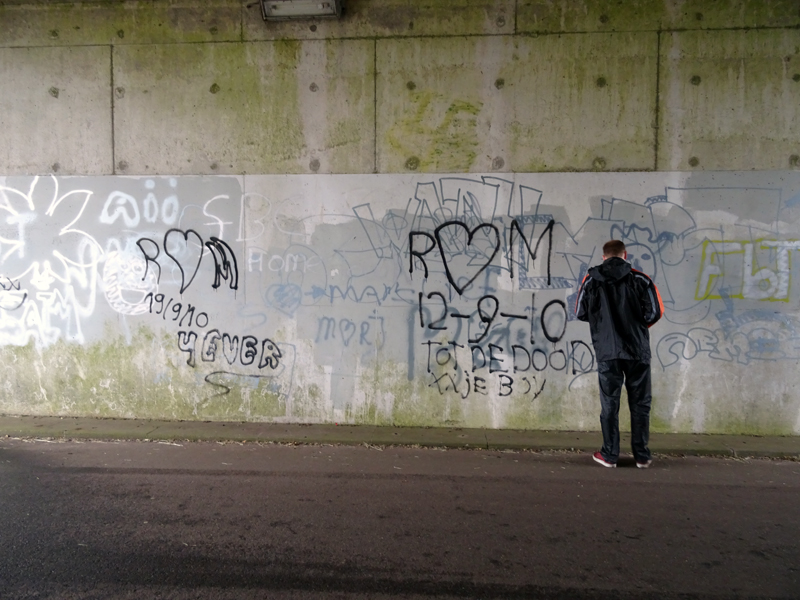 This gave us the opportunity to admire the work of the local graffiti kids. “Till death do us part” seems to have lasted for at least another week. 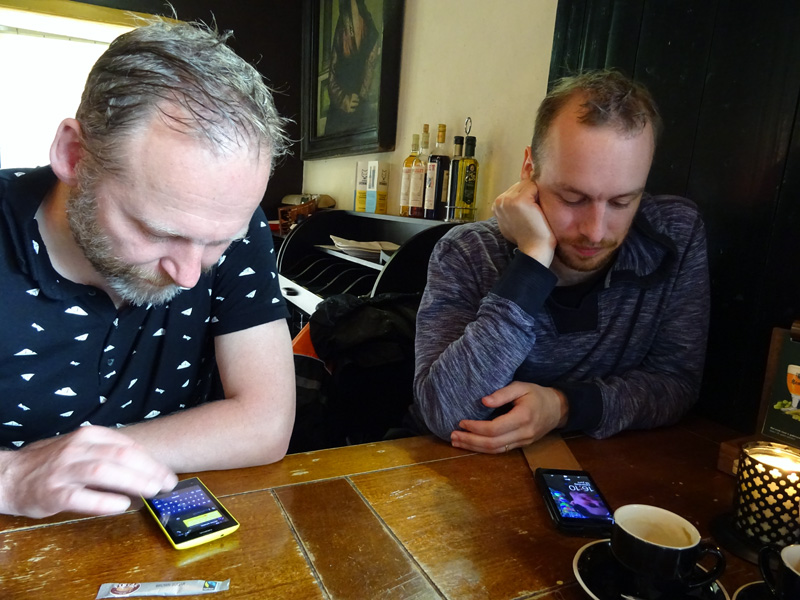 Soaking wet we make it to Fraeylemaborg in Slochteren for a much needed coffee. With twentyseven kilometers to go and a forecast that has been changed to “heavy rainfall”. After careful consideration it is decided that we take a shortcut at Schildwolde back to Bennie’s Fietshandel. Still ten kilometers through the pouring rain. 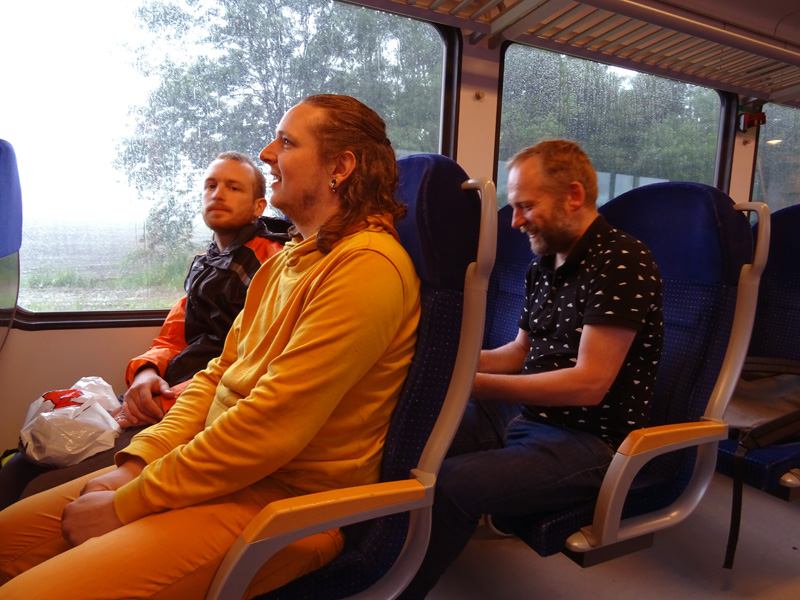 During the train ride back home I am able to have laugh about the whole ordeal. Veenhuis and Jansen are making plans to finish the ride another day. 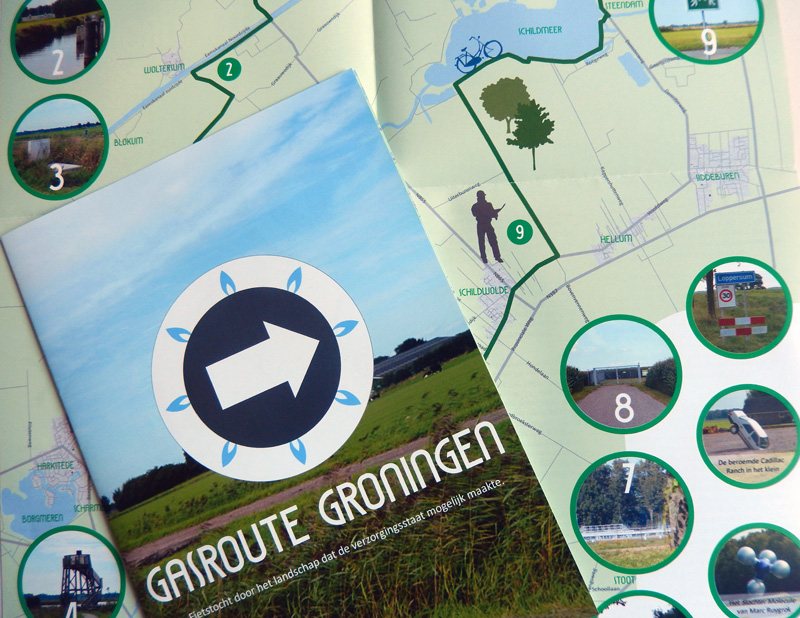 As usual during my own openings, I hardly took any pictures. Luckily Renie Lamers of Stichting KOP did, most of the photos in this report have been taken by her.

She also designed the above route map. They can be picked up for free at different locations around Groningen, if you would like to receive a map in you mailbox please send an email to gas@gasroute.nl. You can also download the map as a printable pdf here (2 MB).

Two final tips for those who want to bike the Gasroute themselves:
– According to Google Maps it will take three hours and twentyfive minutes to ride. This is a very optimistic estimate and only feasible for a very fast cyclist. If you are more of a touristic/easygoing type of bikerider it will probably take you about six hours to complete (including lunch stop and coffee breaks).
– Ther route can be downloaded here as a GPX file for your phone of bike navigation system. Very handy in case you miss one of the signage sticker.